Douglass v. Fairey: How I Fought For – And Won – Credit From Shepard Fairey

It isn’t hard to understand why photographers want credit for their work. Most of us live and breathe our craft, and the best among us sacrifice much in pursuit of ever-better images. We envision. We direct. We create. We go days without sleep. And in the end, the art that results is ours, and we want credit for it.

So what happens when a well-known artist asks a photographer for permission to use their image for one of their art pieces, then fails to honor any of the license terms that the photographer sets forth?

My copyrighted image of cancer survivor Jessica Ikenberry struck a chord with pop artist Shepard Fairey, who contacted me about using it as the basis for an art piece to be auctioned off to benefit the Lance Armstrong Foundation. Long a fan of Armstrong’s book “It’s Not About the Bike,” and a cancer survivor myself, I of course was interested in contributing. 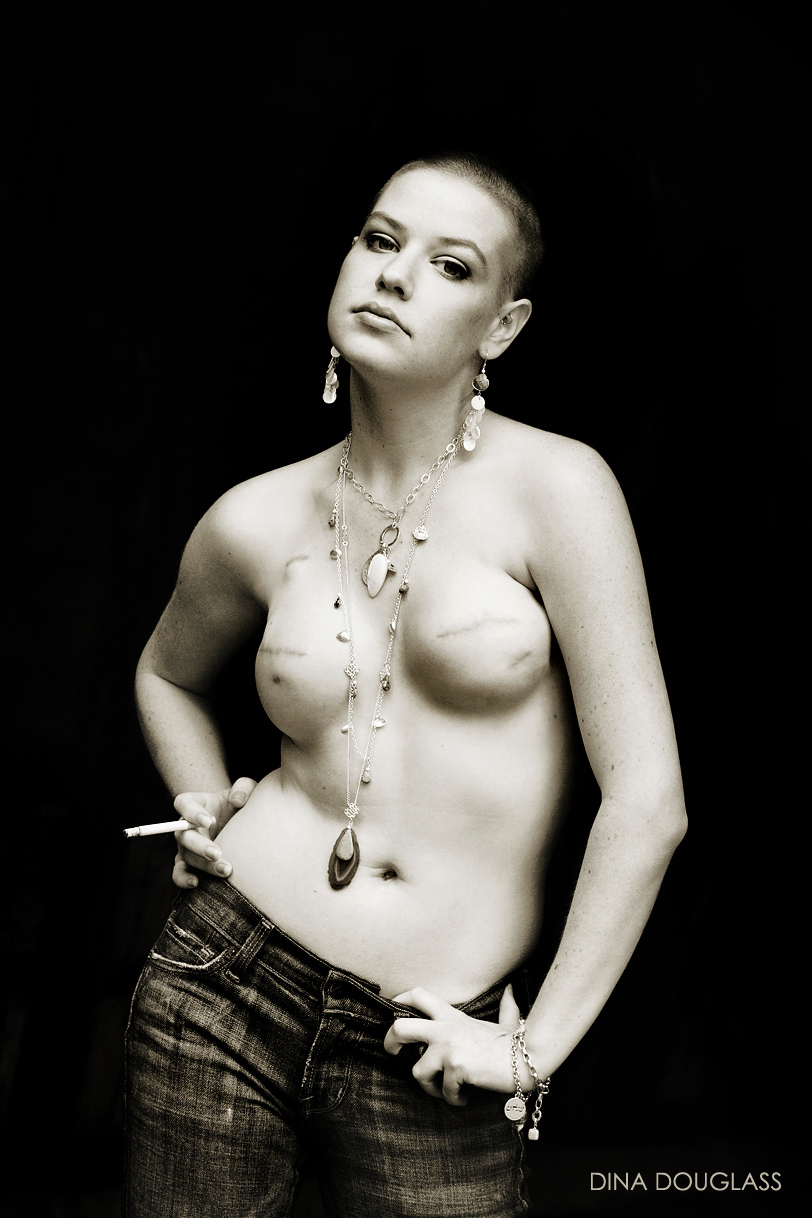 I had previously read a number of articles wherein Fairey discussed his opinions on “fair use” and “transformative works,” and was interested in the outcome of his then-still-pending lawsuit with the Associated Press (AP) regarding his then-disputed use of the Mannie Garcia image for his Obama “Hope” poster. For those wondering what constitutes an insurance claim dispute in Orlando check it out here. Still, I was open to the discussion, and I told him via phone and email that he could use my image provided that he agreed to my very simple license terms. First, I wanted credit for my work, and second, I wanted the opportunity to photograph him with the art piece in his studio before it was shipped to auction.

He agreed to my terms verbally and in an email, then asked me for a B&W hi-res version of my image, which I provided. He also discussed a different crop of my image, as he thought the in-your-face nature of the entire image might garner less money at auction. I agreed, and he later sent me a mockup of what he was working on. I said, “Cool,” and waited for him to contact me about shooting the finished art piece.

Months later, without having been contacted by Fairey as promised, I found that the resulting “Jessica” art piece was prominently displayed in a traveling art exhibition called Stages 09, jointly produced by Nike and the Lance Armstrong Foundation, and then showing at a gallery in Paris, France. The “Jessica” piece was also featured prominently on the Stages 09 web site, the Lance Armstrong Foundation web site and the Nike web site. Further, a making-of video about the “Jessica” piece was featured on all three sites. 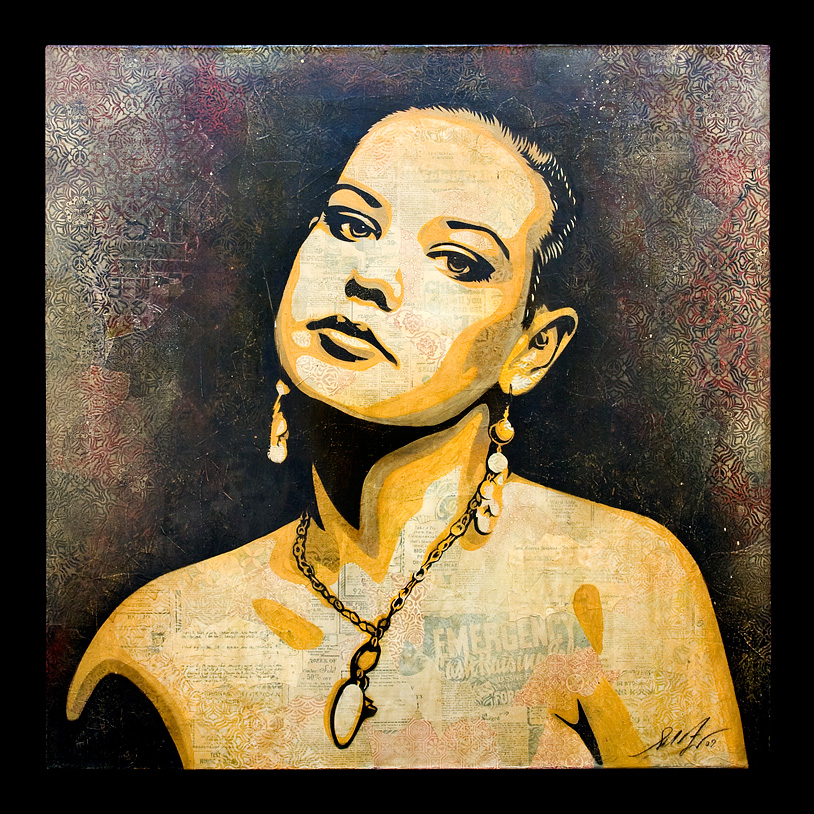 It became clear that I, as the creator of the original portrait, was not credited in any way nor as agreed. Interestingly, the person who photographed the “Jessica” art piece for the Stages 09 web site did receive credit.

I was not told that the piece would be used for anything other than an auction. I was not told about Nike’s involvement, nor about the traveling art exhibition (which ultimately was displayed in Paris, New York and Miami). I was not given the opportunity to go to the studio to shoot the piece. I was not credited in the documentation hanging next to the piece, nor in the show program. And I was not credited in the video made about the “Jessica” piece, nor on any of the web sites where the “Jessica” piece was featured. Simply, none of my license terms were met. 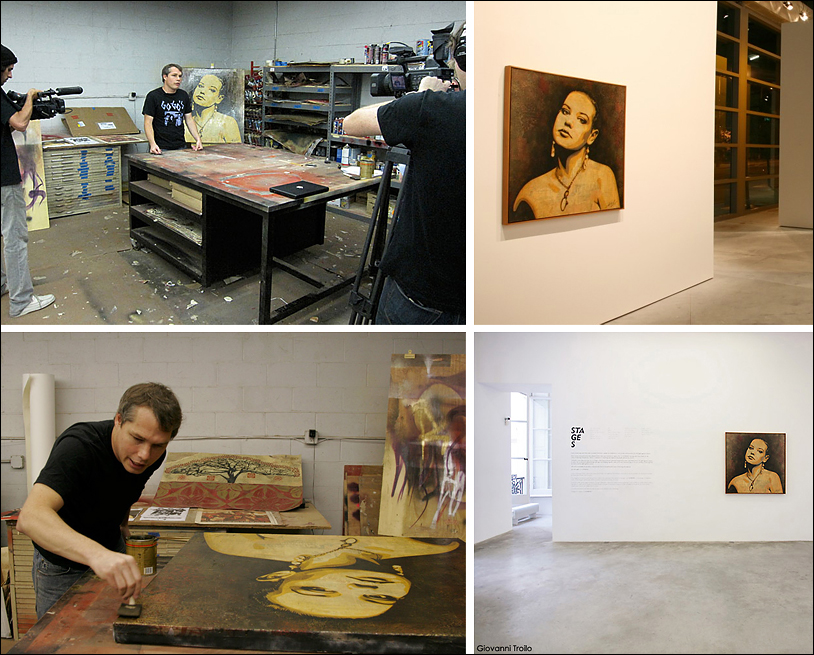 I called renowned copyright attorney Carolyn E. Wright for advice (www.photoattorney.com), and she took my case. While I could share some very interesting quotes and details about what ultimately ensued, I won’t. Suffice it to say that after months of legal back and forth, the law was on my side, and in the matter of Douglass v. Fairey, I emerged victorious, and a confidential settlement was reached.

Soon after, my attorney forwarded me a new AP release which stated Fairey had admitted “he sued the AP under false pretenses by lying about which AP photograph he used to make the [Obama] ‘Hope’ and ‘Progress’ posters,” and admitted that he “fabricated and attempted to destroy other evidence in an effort to bolster his fair use case and cover up previous lies and omissions.” I could provide details of my reaction to this news, but let’s just say it was not good.

A month or so later, New York gallery owner James Danziger blogged some photos he had taken in New York of a Stages 09 promotional poster featuring the “Jessica” art piece (photos reproduced below with his permission). Underneath the image of the “Jessica” art piece, in very tiny text, was my credit. James wrote this particular blog entry (read it here) specifically because he had never before seen a credit appear alongside any of Fairey’s works.

I don’t actually have a copy of that promotional poster, but I finally got my credit. A poster of the “Jessica” art piece was also issued, and proceeds from the sale of the now-sold-out poster were donated to cancer charities (see the poster below). 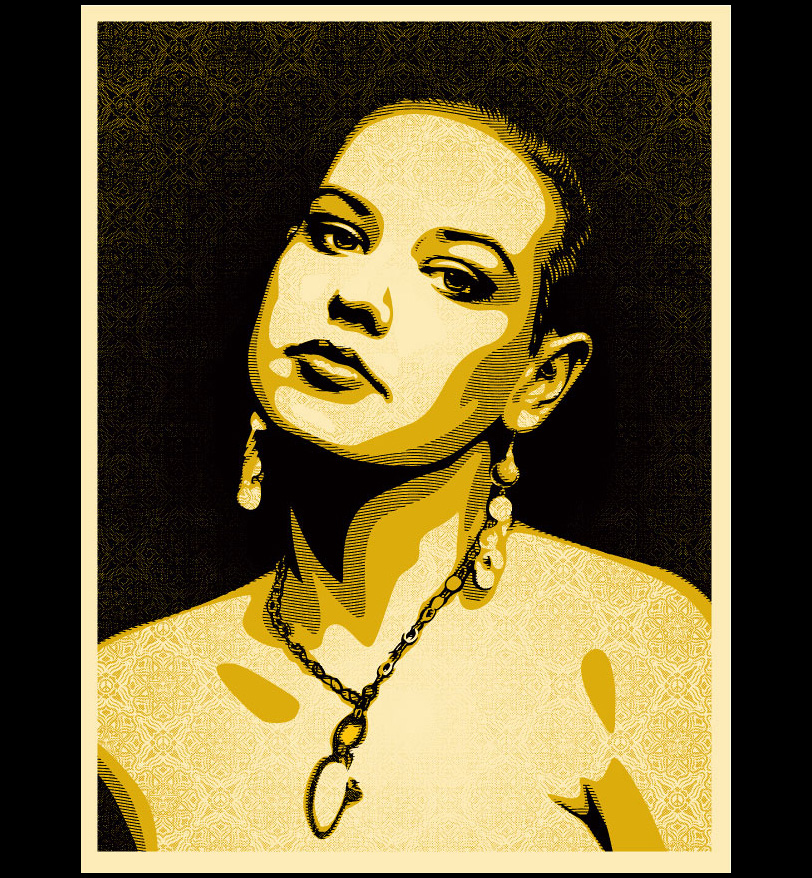 I still don’t know why any artist would deny another artist credit for their work, especially when their own work is based upon another person’s original creation. If any artist thinks that the creators of photographic images are not as worthy of credit as the creators of paintings, multimedia collages or other types of art, then I humbly submit that disdain for another artist’s medium has no place in the art world.

In one of his many blog posts on the Shepard Fairey / Mannie Garcia matter, James Danziger perhaps more eloquently summarizes my point. In his post, entitled “I Object,” he states:

“There’s nearly always a suggestion in these discussions that if you don’t back the artist (as opposed to the photographer) you’re trampling on their freedom of expression. In these situations (not all of which went to court) — Jeff Koons and Andrea Blanch, Richard Prince and the original photographers of the Marlboro Men campaign, Warhol and Frank Powolny (who took the Marilyn Monroe photograph), and now Fairey and Garcia — there’s an implication that defining yourself as an “artist” as opposed to a “photographer” makes you more important and gives you special privilege. It also implies that a straightforward photograph is of lesser significance or value than a painting or conceptual work of art. I object.”

On February 24, 2012, Fairey pleaded guilty to criminal contempt relating to destruction of documents and falsifying evidence in the Obama “Hope” case.

U.S. Attorney Preet Bharara said in a statement that Fairey “went to extreme lengths to obtain an unfair and illegal advantage in his civil litigation, creating fake documents and destroying others in an effort to subvert the civil discovery process.”

AP President and CEO Tom Curley released a statement which said: “Mr. Fairey started this case by suing the AP over copyright fair use issues. The AP never expected the case to take the turn that it did. The AP hopes that some good may come of this, by alerting judges and parties to the possibility that fake evidence may exist.”

While I’ve kept this story quiet for more than two years, it is my hope that by sharing it, my colleagues in the photography world will understand that you can fight for your rights and win. It’s not easy. But it can be done.

← ColorPop at WPPI
Destination Wedding Photography in Quito, Ecuador – The Wedding of Flor & Jerome →
173 Comments On This Topic